This Mistaken Theory Can Destroy Your Health!

A recent study showed that women who regularly douched created a significant increase in their cancer rates.

Would you rather listen to this article?

Ideas such as douching and dozens of other similar theories that attempt to sanitise or treat our way to health using synthetic methods all counter the wisdom of honoring the body’s own internal balance. Anyone who believes that artificially manipulating our own chemistry to create better health may want to reconsider.

These women who were douching completely disrupted the harmony of their body chemistry. They were sold a bill of goods from companies and society that this would improve their body and health. What we know without question is our health is directly related to what is called the “microbiome” within us. The microbiome are the organisms that ride along within our body as partners on our journey from birth to death. The microbiome is one of the keys to health and longevity in my opinion. Everyone knows the older term, acidophilus, which is only one of the many thousands of microbiome. Guess what? Douching eradicated the magic microbiome of these women so completely that the disturbed terrain created their disease.

Louis Pasteur proposed the germ theory of disease in the 1800’s. He theorized that outside invaders caused most illnesses. His germ theory began a philosophy of treatment that is stronger today than ever in history. This system relies heavily on utilizing strong synthetic chemicals to “conquer the enemy”. This is the bedrock of pharmaceutical trainings for every single traditional health care worker in this country. Treat the enemy with everything available and call it “heroic medicine”. (Did you know that the third leading cause of death in this country is prescription drugs taken as prescribed).

The opposing side of this philosophy was championed by many during Pasteur times. Two physicians that did this were Claude Bernard and Antoine Bechamp. 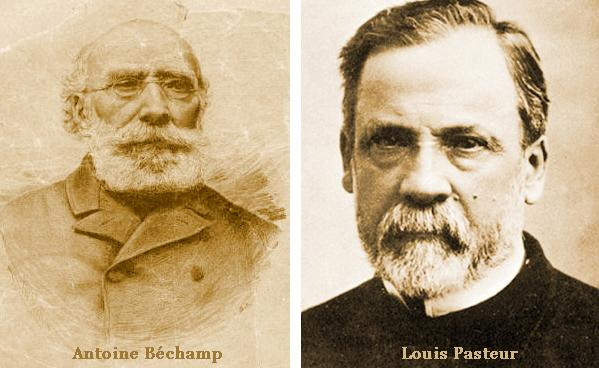 In contrast to Pasteur, Claude Bernard and Antoine Bechamp (1816-1908), contemporaries of Pasteur, believed disease was a condition of imbalance in the internal terrain of body. Bernard and Bechamp emphasized the environment in which germs lived and did not focus on the germs. On the one hand, if the terrain was balanced (homeostatic), then germs could not flourish. On the other hand, if the terrain were out of balance, then germs would thrive. In short, germs do not cause disease. Instead, they are a sign of the weakness of the terrain and not the cause of those conditions (see Stockton, 2000). This is commonly referred to as the naturopathic approach to disease. Have you ever noticed a pet that is older and in poor health has a vastly increased chance of fleas than a healthy vibrant dog? Look to the unhealthy terrain as the reason and less about the flea.

If Dr Pasteur were living today he would applaud the research that now strongly indicates that the microbiome is one of the most powerful therapies to “build a stronger terrain”. The bacteria within us are almost totally either neutral or supportive and only occasionally will unfriendly toxic pathogens make us sick.

If you lived in a community of large numbers of family members where all are supportive of each other you would enjoy mainly harmony. However what if occasionally a renegade member created havoc within the family? You have two options. Have the intelligent wise members of your group surround the trouble makers in order to prevent further damage or secondly you could poison everyone with hopes that a few of your good family members would survive to maintain life. This is the explanation of the opposing philosophies between pharmaceutical intervention and supporting the terrain.

On Louis Pasteur’s deathbed, he stated something that recounted all his previous conclusions which is the following: It is not the germ, it is the terrain. This means that Pasteur finally understood that creating a strong healthy internal terrain is the only wise path for optimal health, not always attacking the germs! However it was too late to stop the massive push toward heroic medicine.

Maybe it is time to reconsider everything we have believed about disease and the solutions to it. I plug into my decision making on health matters the effects that a treatment may have on my “terrain”. Destroying the terrain in hopes of achieving short term gains in health is not the wise option for me any longer. The most glaring example of this is the overuse of antibiotics. All experts predict we are near the end of the era of effective antibiotics. Everytime we use an antibiotic we destroy the microbiome and we also never allow our own immune system to learn to conquer its own battles. The analogy to this would be if you were a fourth grade teacher who was trying to teach math to the children in a classroom. Every time a child attempted to solve the math problem you took the pencil from them and solved it for them. Do you believe the child would ever learn for themselves how to find the solution? We now live in a society of immune systems that are so reliant on antibiotics due to overuse that our own systems have no clue how to find its own solutions to infection.

We are in a marvelous age where information abounds but wisdom is in short supply. Hopefully awakening to this can foster our journey to optimal health but it may take stepping away from a broken system that refuses to recognize the importance of “the terrain”.

Best to you on building your healthy terrain.