Tenacity and Passion Are Foundations of Nutrition World

I still remember being a Chattanooga police officer in 1978, and sitting alone in my patrol car early in the morning, when almost everyone else in the city was asleep. During these slow hours, I would study every book on nutrition and vitamins I could get my hands on.

Now, almost 40 years later, as I look back on how my life unfolded over those decades, I can see how those nights studying in the patrol car planted the seeds of my passion for nutrition and health, which continue to blossom even today. Click To Tweet

In 1979, I opened Nutrition World at Four Squares Mall on a shoestring budget of $25,000. With that amount, borrowed from a local bank, I had to purchase every item for my new business, from the checkout counters and shelving to the inventory. The first three years of business almost broke my entrepreneurial spirit as I worked various shifts as a patrolman and at Nutrition World during the day. The challenge was not the work hours, but the days when we would count the drawer at night and our daily total would be less than $100. Often, if it was 7 p.m. and we were within a couple of dollars of breaking a hundred, I would buy a protein bar from my own store just so things would not seem so dismal. Three years into the business, we finally produced our first day when we actually broke $300, and I was ecstatic. This milestone certainly did not mean I was making money, but it did give me the confidence to leave the police department to pursue my dream of building Nutrition World. In 1982, I opened our second Chattanooga location in Brainerd Village shopping center. I had one full-time and one part-time employee, and between the three of us, we covered many hours. This new location was a blessing for me, as we slowly but consistently built the number of customers who valued our ethics, knowledge and good intentions for our community. Several years later, Nutrition World relocated to a much larger location in Brainerd Village and we closed the Hixson location. My only daughter, Cady, was born in 1990 round this time. Our first year at the new location, business dropped. Panic set in because my overhead had tripled while my profits had plummeted. I again buckled down, focusing my attention and hard work on overcoming this challenge, as I have done countless times in my career. The following year, the business turned the corner and we finally started seeing light at the end of the tunnel.

I now see the culmination of a dream that started on those cold, dark mornings in a police cruiser in 1978.

This new, larger location offered me the square footage to add in to Nutrition World the type of practitioners who shared my belief in holistic, safe methods for treating disease and achieving optimal health. Mackie Pierre of MAXX Fitness began offering one-on-one personal training, Catherine Thomas offered massage therapy, and Dr. Brett Wheatcroft started his chiropractic practice. All three of these practitioners began providing their services in the back part of the Brainerd Village store, and all three are still with me, 17 years later—along with more than 10 additional practitioners. 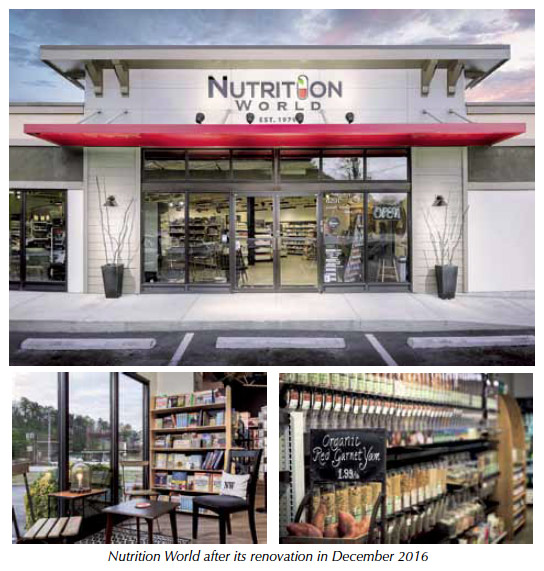 Forward into the Future

During these years, as Cady grew older, her mother would bring her to Nutrition World, and by age 7, Cady was working around the store, bagging items for customers.

In early 2000, I had a strong intuition that renting space in a mall was limiting my future on many levels, and I kept my eyes open for a better location. In 2006, I had the opportunity to purchase a standalone building at 6201 Lee Highway, where Nutrition World is today.

Despite that fact that I’ve taken a disciplined approach to healthful eating and using vitamins almost all my life, I never forced any of my beliefs onto my daughter. As Cady grew older, she worked more hours at the store, in a variety of roles. She then went off to college for four years, but upon her return, she wanted to see if nutrition and health were part of her life’s calling, so she joined the staff at Nutrition World—by that time 20-plus Nutrition World after its renovation in December 2016 strong—and ultimately became an integral part of the business’s success.

Cady’s vision and passion for helping people, her interest in learning about holistic nutrition, and her knack for entrepreneurism have astounded me, and I could not be prouder. She is presently pursuing her master’s in nutrition as she works full time at the store as director of sales.

With her incredible innate abilities, giving heart, business mindset and thirst for knowledge about nutrition, I believe she has everything necessary to carry Nutrition World far into the future.

I am so grateful for the support I’ve received in building the awesome success of Nutrition World. I will never ignore the important role of the Chattanooga community, my family members, my amazing staff and especially Cady have played in this profound gift. I now see the culmination of a dream that started on those cold, dark mornings in that police cruiser—and it feels magical.

Posted in Blog
0
0
Your Box
Your cart is empty
Continue Shopping
Calculate Shipping
Apply Coupon
Available Coupons
podcast Get $5.00 off
test-100off Get 100% off
X
X
X